Today marks the 6 year anniversary of meeting Bret. I can’t believe it’s been that long already. I love that I’ve known him almost as long as I’ve been shooting weddings. What a crazy dance it’s been so far!

My dear friend (and one of my grooms) Dan mentioned he had a guy friend he thought I might like. So, we set up a blind date. Now, at this time, Bret was still living in California and was still in the Marines. He just happened to be in Virginia for some training in February of 2007. We met at the TGIFridays in Bel Air that crazy night. It was THE most awkward date I’ve ever had! AND I’m not going to lie to you, dear readers, when I first saw him, I was disappointed. My initial reaction was “Oh…that’s him??” And honestly, his reaction was pretty similar to mine. We did enjoy talking to each other though, so we exchanged numbers and the rest is history.

We don’t normally do much for this anniversary, but this year, we’re grabbing dinner AT TGIFridays! 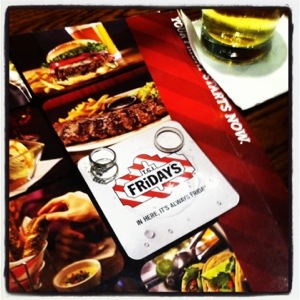