It has been almost nine years since this took place, but it is still something I think about.

On Friday, while Bret was at work, I opened a book I hadn’t read for several years. A quote jumped out of the page: “Look at everything as though you were seeing it either for the first or the last time. Then your time on earth will be filled with glory.” – Betty Smith. I thought about that evening and the following morning. Bret and I had decided to go canoeing several weeks ago on Saturday since it was his first official Saturday off since he started working at Dick’s.

When we arrived at the river, it was noticeably higher than normal. Bret commented a few times at how high it was and also how fast it was moving. He had just canoed the same stretch about 2 months before. Instead of really thinking about the situation, we said a quick prayer and put in. For about 4 minutes, it was glorious, on an adventure with my new husband in the beautiful wilderness. That quickly changed when we went a few hundred yards and I noticed a fallen tree across the entire river.

We tried to paddle to one side but couldn’t and hit the tree around the middle. The canoe sided up next to the tree, tipped and we both fell in. My first thought was, ha, I knew we’d fall in. Immediately after, I was under the water and then the canoe was turning so that it covered my direct pathway up to the top. I had one second to think, oh my gosh, I’m going to drown, right now. Then I felt a pull, I hit my head twice, and I popped out the other side, backward. I saw Bret pop up right after.

He had more time under, to think about going up for air, wondering if there was enough time to go back for me. I was able to grab a paddle floating by, we swam to shore, I got out and he ventured downstream for more of our floating items. He was only able to grab the car pads, that keep the canoe off the car. He then tried to dislodge the canoe, which was somewhere under the water where we went down. I was on the shore yelling down to him, asking what a concussion looked like, what were the symptoms, etc. after about 10 minutes of this, he decided we might need to take me to a doctor.

We walked back on a trail on the side of the river, where we ran into a man running with his dogs. He asked if we were going to put in…while we’re standing there with one paddle, 4 car pads and completely soaked. We half-laughed and said we already had and almost drowned and that the canoe was stuck. He offered to help us fish it out, even after we told him about the danger of the situation.

After putting his dogs away, we walked back and he saw the tree and agreed at the danger. Just seconds later, the canoe popped out the other side and we took off down the trail. The guys jumped in and I ran along the path. It was about a ¼ mile down the river that they finally got a hold of it and got it out. Once we got it out, the guy ran off and we carried the canoe from there. The canoe had sustained some damage as well…the front part, where the rope is attached, was torn out, there was a large split on one side, about 2-3 inches wide. We were able to rig it on the car and get back to the house.

Later that day, we sat down and read from Facing Your Giants, a book we hadn’t read from in months, at least 4 months, and the chapter was on family. There was a portion about treasuring and honoring your spouse. While part of what spoke to me through all of this was God’s amazing, undeserved, overwhelming Grace and Mercy on our lives.

We went back to the spot the next day, and there was actually another tree directly underneath where we had flipped, as well as many branches. There was really only about 4-6 feet of a clear shot through. If we had been feet off, we wouldn’t be here. If the water hadn’t pulled us through, we wouldn’t be here. Also, if we hadn’t left at the moment that we did and came back to the tree with the guy when we did, the canoe would’ve been long gone…even though it is probably beyond repair.

The thing that has had more impact has been God’s hand in the small details…me reading from the book I hadn’t touched in years! And then that we would run into the guy at the exact moment…who, I might add, we might not have talked to if I hadn’t stooped down to pet his dog…and if he hadn’t convinced us to go back at just that moment, we wouldn’t have the canoe. And then the book we hadn’t read in months, right at the perfect chapter. I can think of thousands of reasons for the experience…to humble us in the face of the outdoors and our own pride…to remind us of how short our lives are…to appreciate every moment…but mostly, I am reminded of how deeply our Father loves us, to love us in large things, like protecting our lives, but also small, details that only you and Him would know about. What a great God!

….just imagine four more feet of muddy water and this is what the river looked like… 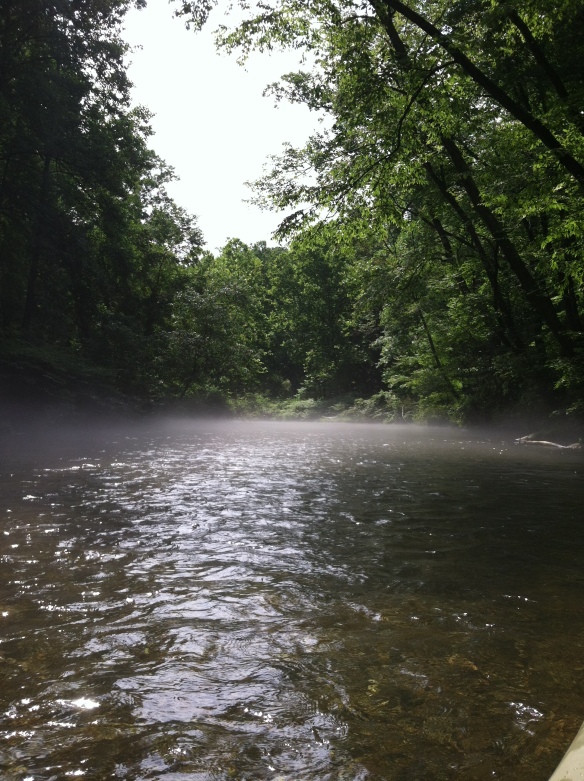 Did you like what you read? Here’s some ways you can support us and this blog!
Join our Facebook group, Planning an Epic Road Trip on Any Budget
Join the Journey With The G’s email list (bonus – you get my Epic Road Trip Budget spreadsheet)
Buy my book, Planning an Epic Road Trip on any Budget
Buy my book, Trusting God With 2 Cents: 22 Days To Becoming A Successful Christian Business Owner.
Shop on Amazon (no additional cost to you, this gives us a percentage of what you order).
Check out our resources page.
Subscribe to our YouTube Channel